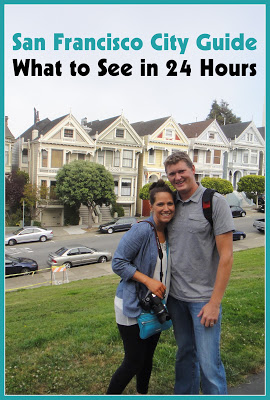 San Francisco in One Day

My husband and I recently stopped off in San Francisco for a one-day adventure! Neither of us had ever been there, and we purposefully chose to spend a one-night layover on our way to Hawaii. We were determined to answer the question: if you only have one day to spend in San Francisco, what do you see?

I started months ago, googling and pinteresting “San Francisco City Guide” and “What to See in San Francisco”. You can see some of the things I found on my 10 Year Anniversary Pinterest board.

I found pictures of several landmark spots that just screamed “San Francisco” to me. These were the spots I wanted to see and experience. We didn’t plan on spending big money on fancy tours or tickets. I read that walking in San Fran is best, and that is indeed what we did! Oh boy did we walk! We went with no real plans and nothing mapped out. Our biggest surprise: we didn’t come across any hippies or liberal activist groups. Maybe we just happened to pick the right neighborhoods.

I also googled this question a lot before going! I had to pack a suitcase for two weeks that included stops in San Francisco, Maui, and LA/Hollywood. I had a lot of fun, dressy outfits packed and cute sun dresses for Hawaii but had no idea what people wear in San Fran. I read somewhere to dress warn. When you think of California your mind instantly goes to the warm sunny beaches, but a sure-fire way to get spotted as a tourist is to dress for warm weather and end up buying a sweatshirt on the street because it’s so cold! It was definitely very breezy and chilly at times, yet the sun was still hot.

As a last-minute move, I reluctantly switched out my more fashionable, yet uncomfortable shoes for a pair of running shoes and TOMS. I was so glad I did! I knew San Francisco was hilly, but I never could have really comprehended how steep some of those hills would be! We walked and walked, and walked some more. I wore leggings, TOMS, a sleeveless shirt, and a lightweight blazer. There were a couple of times that I took the blazer off, but most of the time I was glad to have it, and I was so glad I had not worn a dress!

The first thing I think of when I picture San Fran is the architecture. We were not disappointed! Since we had chosen to walk, we were really able to take it all in.

The other big thing you have to see is that infamous, high-security prison, Alcatraz. Since we were only there for a day, we opted out of spending money on tickets to tour the facility. Tickets can be purchased to ride a fairy over to the island, and then take a guided tour of the grounds during the day or at night. We chose to get pictures from the mainland, and I have to say, it is rather beautiful. Almost every picture you take of the bay includes Alcatraz looming in the background. Quite a beautiful, yet eerie site.

We had read that this spot is a favorite to tourists, but locals don’t care for the hype. It’s a fun place, full of bustle and beauty. There are many picturesque spots along the water, and sites to take in. We ate here for lunch at Alioto’s which was very good and had a pretty nice view of the docks.

Just down the street from Fisherman’s Wharf is Hyde St. Pier, which offers great views looking back on the city. We saw beautiful ships, that you could also tour for a price, and captured great shots of the Ghirardelli factory. We also noticed, after some shock and disbelief, that a public beach was located right here and swimmers could be seen darting in and around the great ships and docks.

The Palace of Fine Arts

We seriously still have absolutely no idea what this place is! Everyone told us to go there, but no one could tell us a thing about it.

When was it built? Why? By who? For what?

Hmmm, let’s check out Wikipedia, shall we?

Like I said, we chose to walk our way around the city (as many had suggested to us). We were very glad we did! We went away from our one-night stay here, feeling like we had covered that city. We felt like we got the real San Fran experience, up close and personal. We did take a cab to and from the airport, and we did get a cab a couple of times that we were just too exhausted to make it back to our hotel. There are other forms of public transportation and other options of getting to and from the airport, but since we were on such a time crunch we chose to use the cab just a few times. Like I mentioned before, wear comfortable shoes! This is some serious walking. Some may even call this hiking – hey, just check out the incline on that sidewalk!

Here it is folks, the real live Tanner home from the opening scenes of Full House! The show wasn’t even filmed here, production took place on a movie lot somewhere. But still, as far as I’m concerned, this was it! We were like giddy little kids, pushing on, hill after hill, in search of this home at 1709 Broderick Street. While we were there, other cars passed by and honked, or stopped for a picture. The funniest moment was watching a group of giggling, 30-something-year-old girls pile out of a car to get their picture in front of the home. We fit right in

One of the most photographed spots in the city, the Queen Ann Victorian homes of “Post Card Row” are also known as the “Painted Ladies”. Alamo Square, the spot overlooking these homes and the city skyline is also featured in the opening credits of Full House.

We stayed the night a the beautiful, Washington Square Inn. This charming bed and breakfast was the perfect spot for us to crash after a long day of exploring. It was very clean, and the location was great. It really was right in the center of anything we wanted to see. There were a lot of great places to eat around the Inn as well.

We waited until the last possible moment before leaving town, to get a picture of the iconic bridge. Every other single minute we were there, it remained hidden behind a hazy wall of fog. Locals all said this was normal and that photographers usually catch the best view at mid-afternoon. We took a cab from our hotel over to the bridge as soon as we noticed the fog lifting. We explored the area by foot, but should have asked our driver to come back for us, because finding another cab back from there proved futile. Instead, we walked back, and by this time our legs had just about given out. We had walked so much at this point, I think I was going to seriously lose it on someone.

No, we did not ride one. Not because they are expensive, but because my husband and I both thought we would get motion sickness, riding it down the steep slopes of Hyde street! We did get a picture though.

The “Crookedest” street in America, Lombard St is one of those iconic destinations that I just had to photograph.

Other Things to Do and Places to See