Homeschooling a Gifted and Talented Child 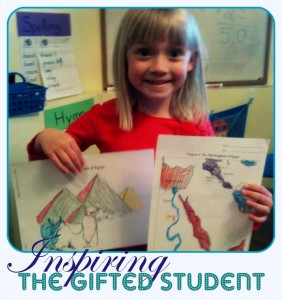 Sarah, labeled this post for me. {I don’t know that I would have thought this way!} I graduated from High School in three years. I also graduated from Cedarville University in three years, with a degree in Finance. Some would say that I am very smart, but I would label myself a hard worker. And I really believe that God orchestrated that whole timeline! With that being said, my six-year-old daughter is just finishing third grade Bob Jones reading and second grade Saxon math. She has been tested each year to be admitted to our Public Gifted and Talented School and has been accepted each time, so she is classified as Gifted and Talented.

Honestly, I had her tested to check and see how I was doing. Although I found out later those are more simply IQ tests than an actual test of what they know at the time.

How much time should you spend on school?

I have felt varying levels of guilt because Natalie does catch on so quickly I feel pressure to do more all of the time with her.  I know I could teach her a second language, violin, piano, sewing etc…I have ultimately decided I will spend an hour a day with her on academic school and then quit. I have afternoon worksheets for her to do on her own. I remember being so excited when she was able to do something without me like a worksheet :)

*Each state has different requirements. I think some determine how much time your student has to spend in school. Natalie would have been in kindergarten this year because of her November birthday.

I tried doing one math lesson a day, but if she gets the concept then I move on and may do two or three. Reading tends to go the same way because reading lessons sometimes include grammar or phonics. When I know that she has that concept I don’t repeat it. I started just following the lesson plans and then realized that was foolish to waste our time repeating so much. I decided if I found she forgot something I’d just cover it then. I also look at the index to see what’s coming. If for example they want her to know how to spell number words up to 100 then I add those to her to spelling words. Then we aren’t held up when we get to that section.

What days do you do school?

I started school because I was looking for more structure and something else to do. Natalie enjoys school, so we still do school on Saturday. Now I am not a crazy person, meaning I don’t have the same schedule, but I would definitely do a reading lesson and a math worksheet. That would take about a half an hour. As the kids get older and their school day becomes longer I could see us looking at a four day schedule. Under that system you take one subject and do an extra lesson each day, so all of your work is done by Thursday and Friday is your field trip day or day off. For example, Monday you would do 2 Math lessons, Tuesday 2 Reading, Wednesday 2 Science lessons, etc.

Because we would cover several lessons a day, and because I teach more than Monday through Friday I do not like prepackaged sets of curriculum. ~Julia