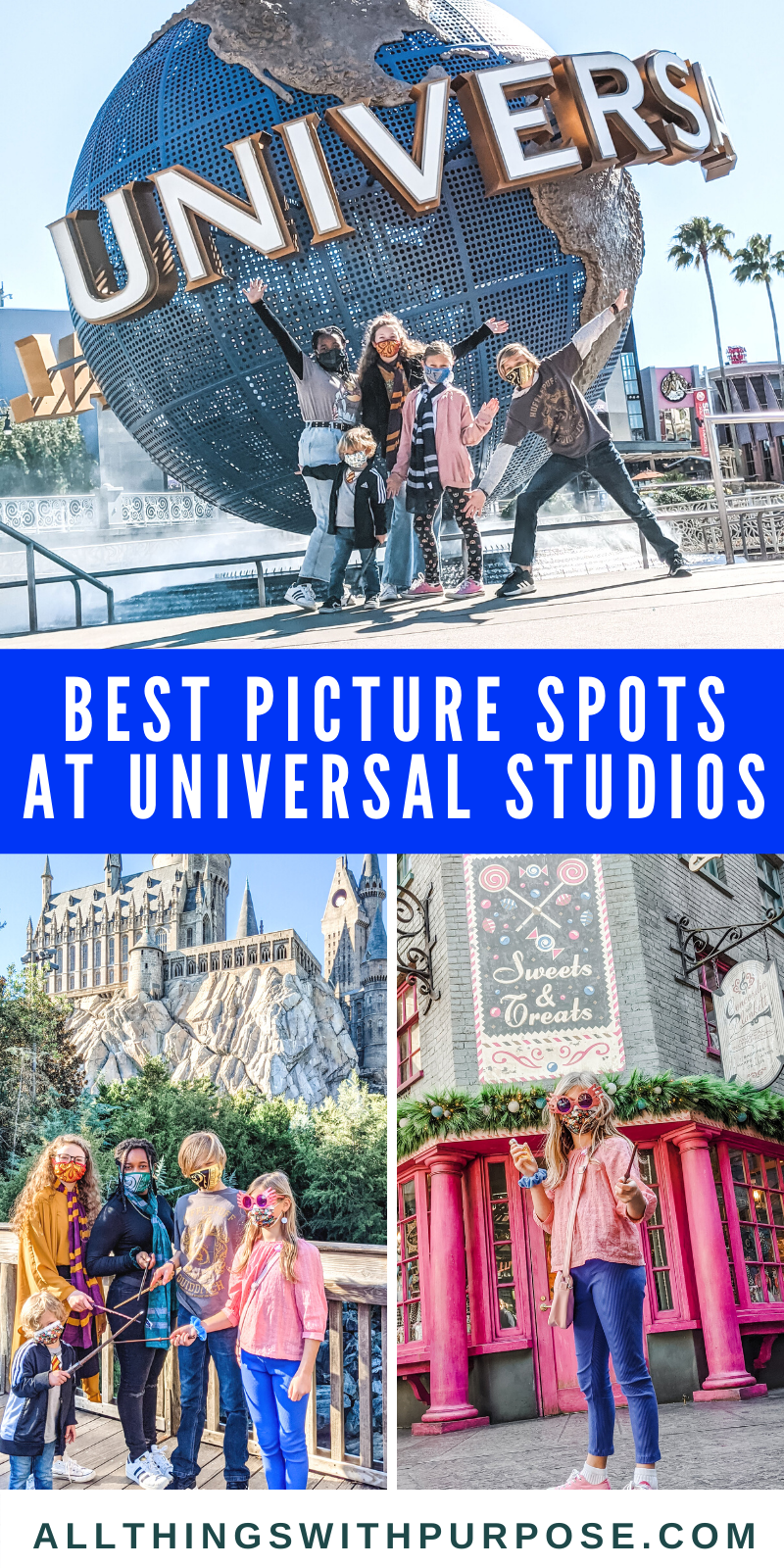 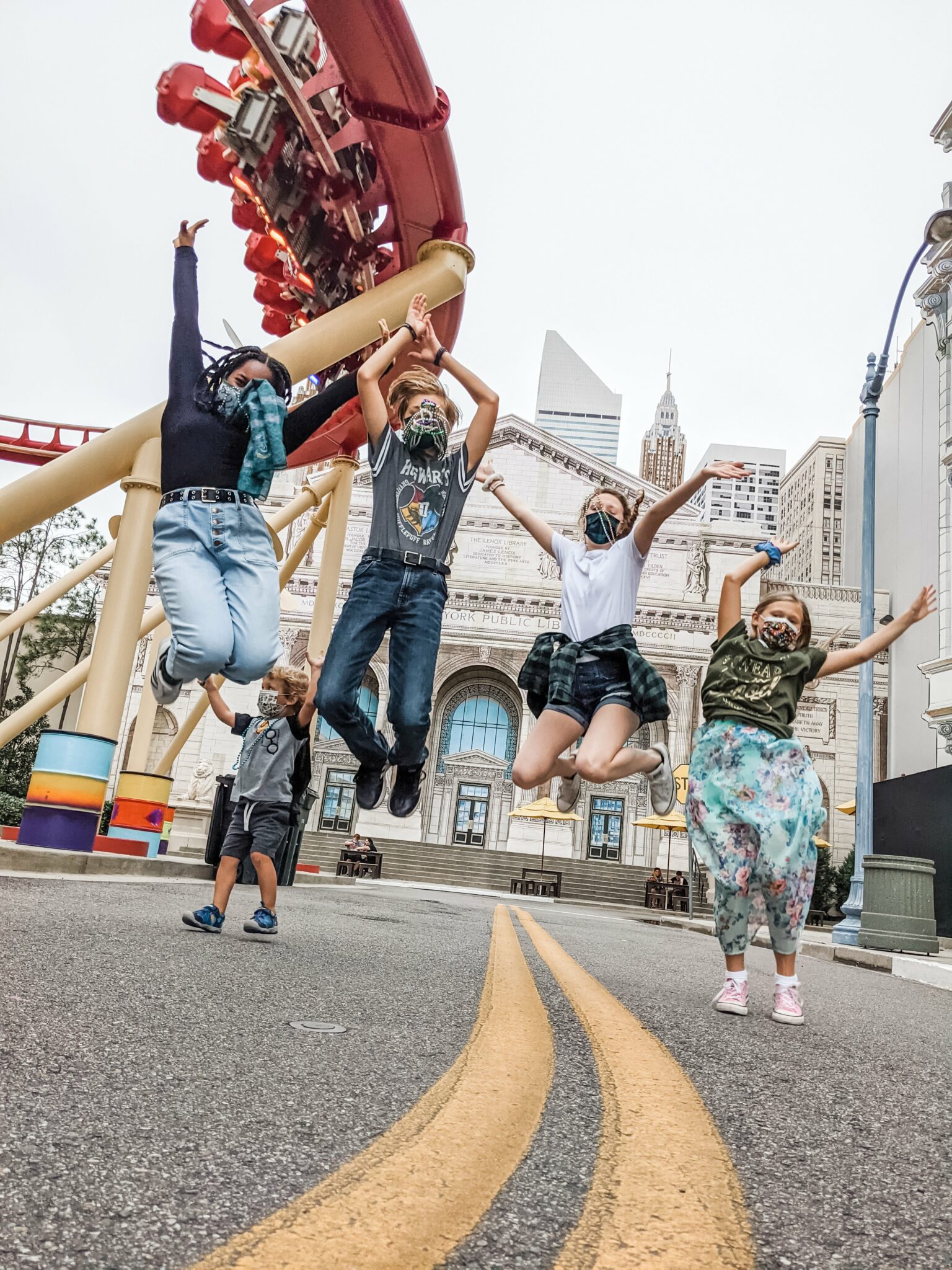 I’m a sucker for a good photo op and I generally rate the success of a trip based on the photos that we take! #sorrynotsorry I love taking pictures and I love looking back at them from years passed. Whether you’re really into picture taking or not, everyone likes going home with pictures from a vacation that they have invested money and time into. I like the saying “collect memories, not things,” but for many of us, a picture is what keeps the memory alive. Whether it’s scrolling back through your Instagram history, a photo album, or Facebook memory, who doesn’t love pictures?

Where to Take the Best Photos at Universal Studios Orlando

I’m going to share some of my favorite theme park picture taking tips, and all my favorite spots to stop for a picture while visiting Universal Studios Orlando. Take a deep breath. Taking pictures shouldn’t be stressful. The beauty of our modern cell phones is that we have an amazing camera at our fingertips at all times. Keep it charged up and ready to go. 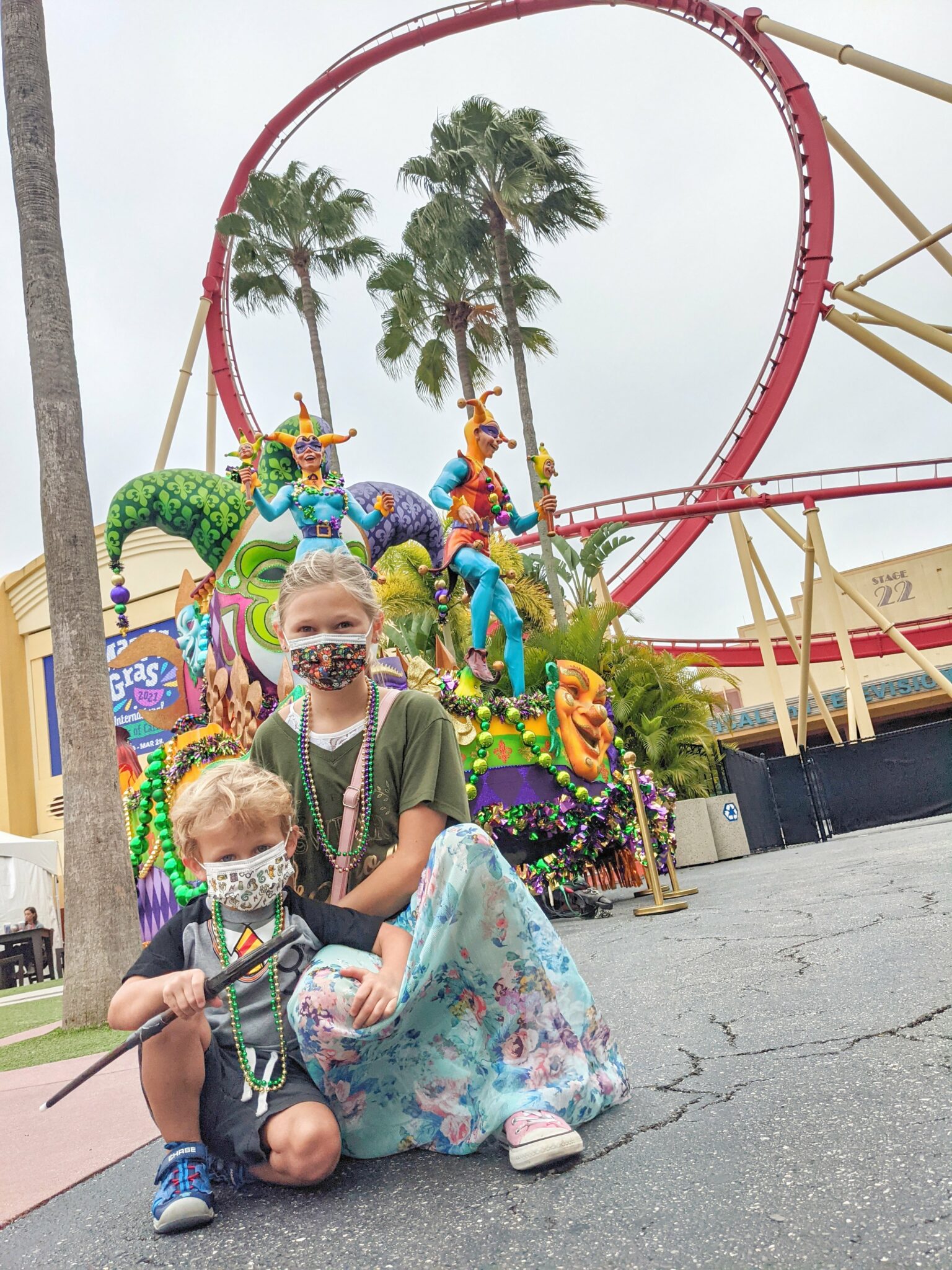 Here are a few quick tips to get you started at any theme park:

One of the best ways to create a cute picture is to wear the appropriate outfit. When visiting Universal, you’ll want to dress comfortably for the weather, but you’ll also want to look the part. This is your opportunity to have fun with your love for Harry Potter, Minions, Dr Seuss, etc. Scroll through the images below for links to our favorite park attire!

I’ll break this into a few sections to share my favorite photos at each park. First up, Islands of Adventure. 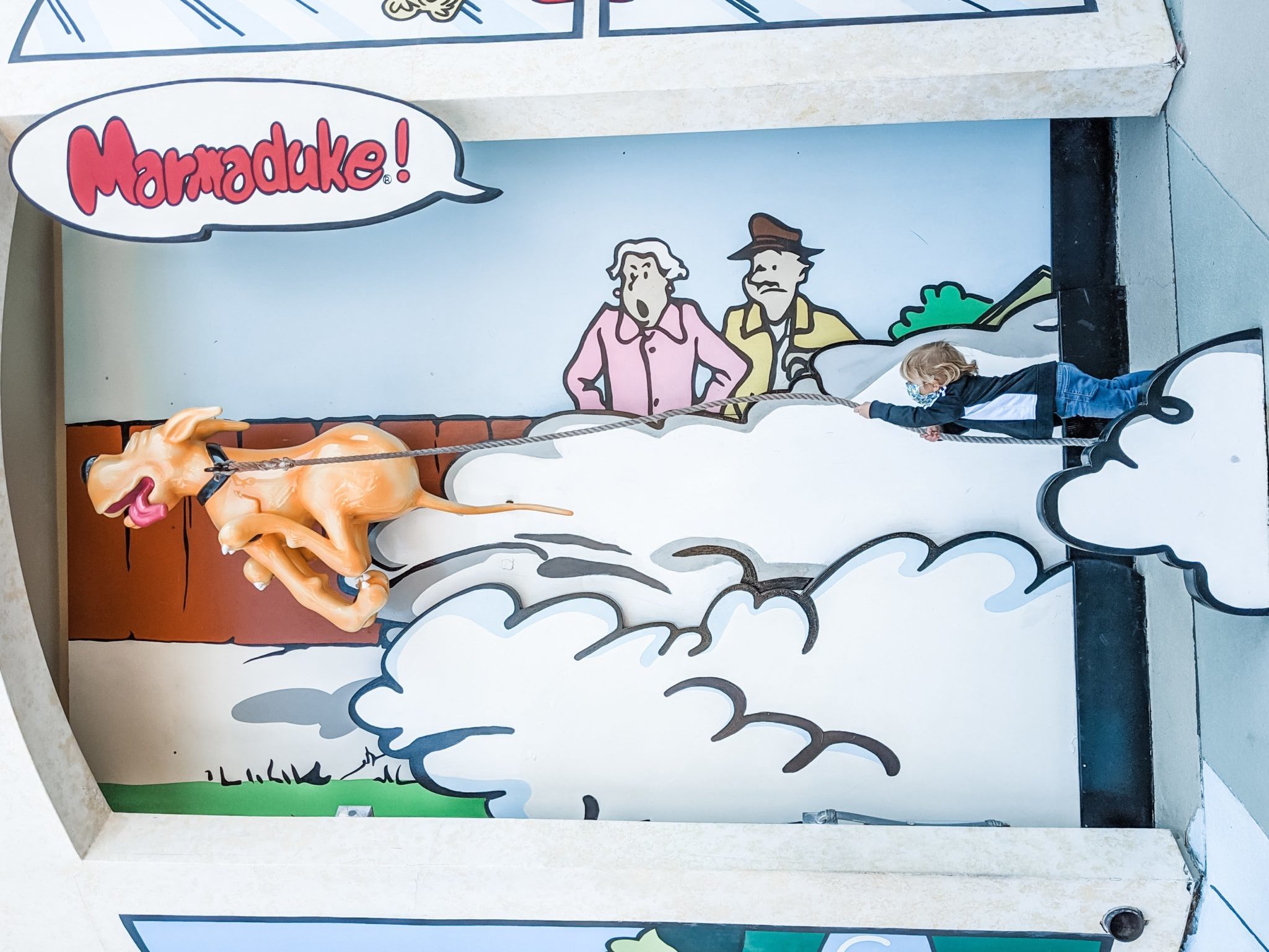 1. Toon Lagoon: This isn’t necessarily our favorite spot, but it is FULL of photo ops! Many of these will probably go over your kid’s heads, but it’s fun either way. 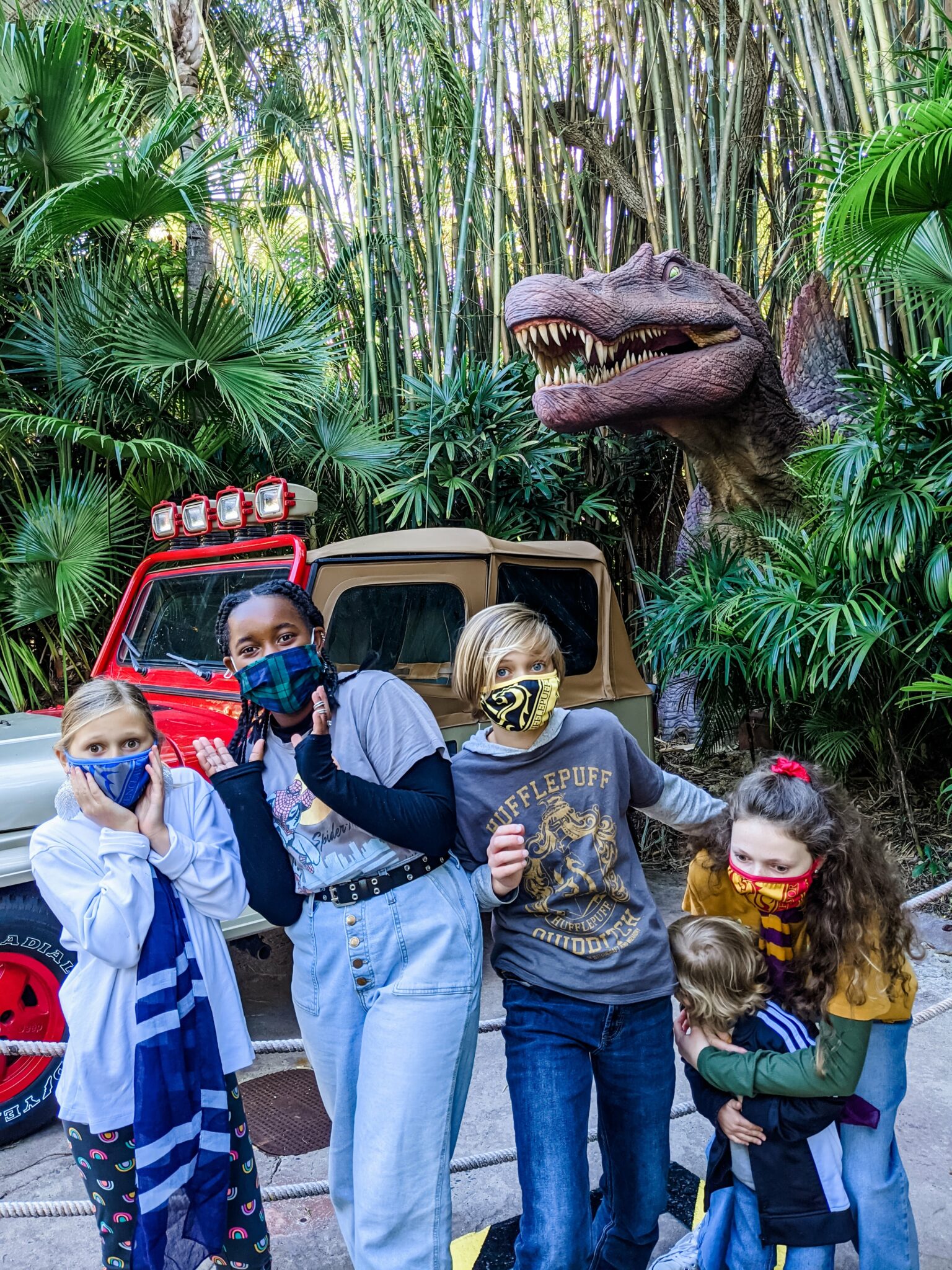 2. Jurassic Park photo op: This spot has an automated photo capture machine where you can pay to get a print-out. We like posing and taking our own, but the print-out is also cool. 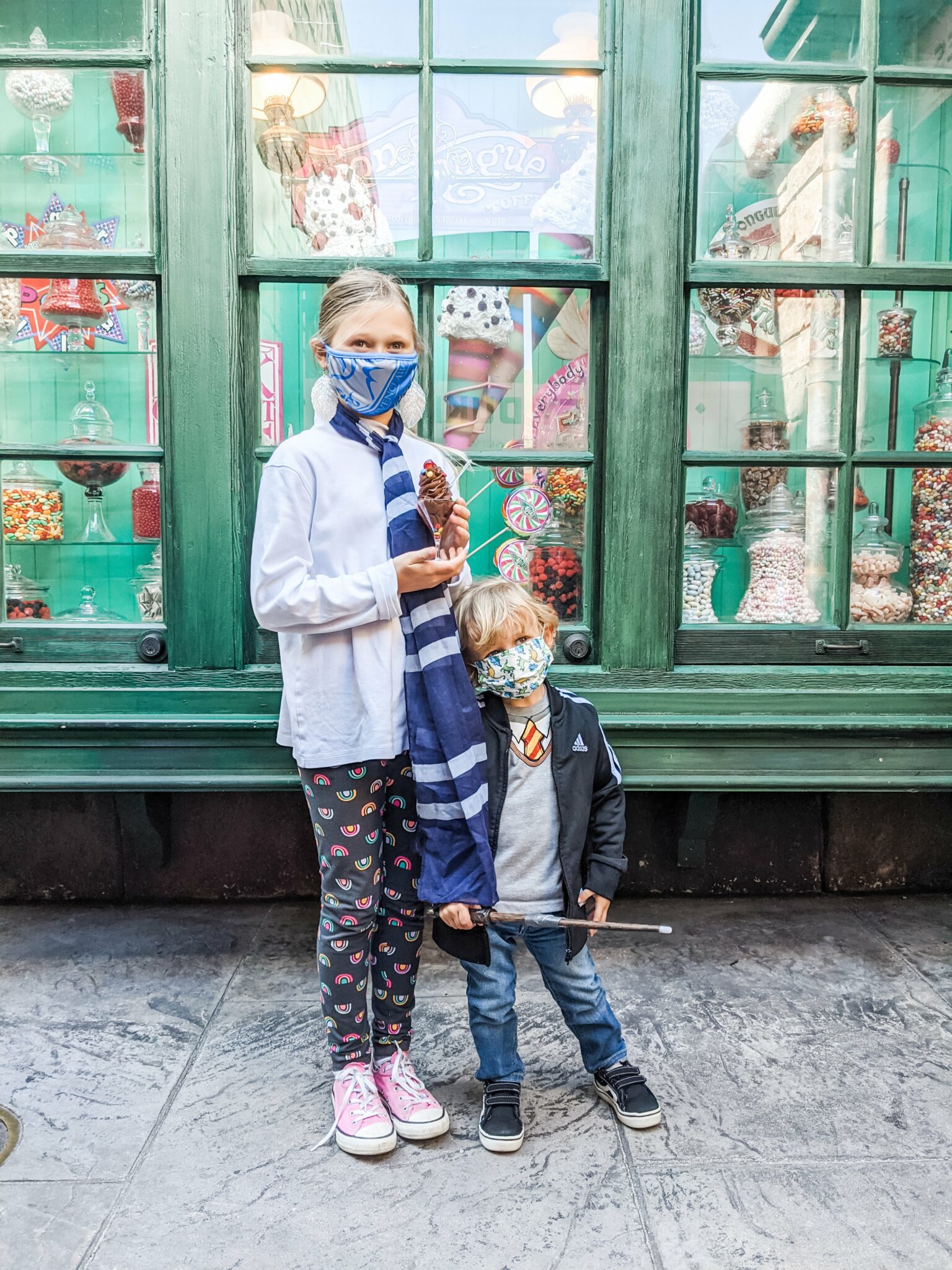 3. The “secret” alley behind Honeydukes: If you walk around the right side of Honeydukes, you will find a little alley way to leads back to a cute window display. It’s the perfect spot for taking pictures because there are hardly ever people! 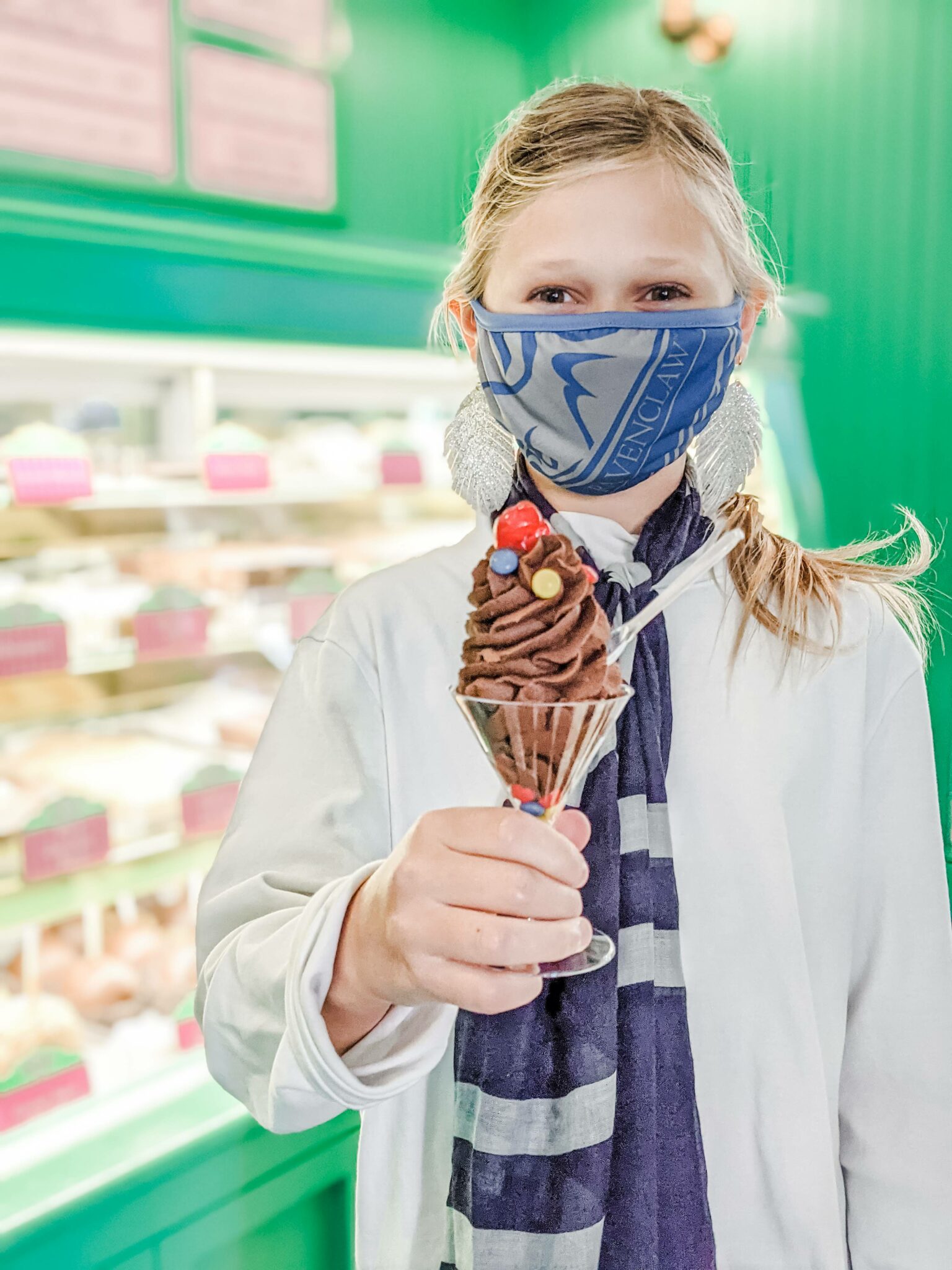 4. Inside Honeydukes: I just love the colors inside this candy store! I think it’s definitely worth the price of a sweet treat to stand with it in front of the candy counter for a picture!

5. Green windows in Hogsmeade: Across the street from Hogsmeade station are some pretty, green windows, perfect for a Slytherin photo op!

6. In front of the train outside Hogsmeade Station: You can patiently wait for a break in the ride queue to open up behind you, or snap a quick picture while waiting to ride Hagrid’s Magical Creatures. 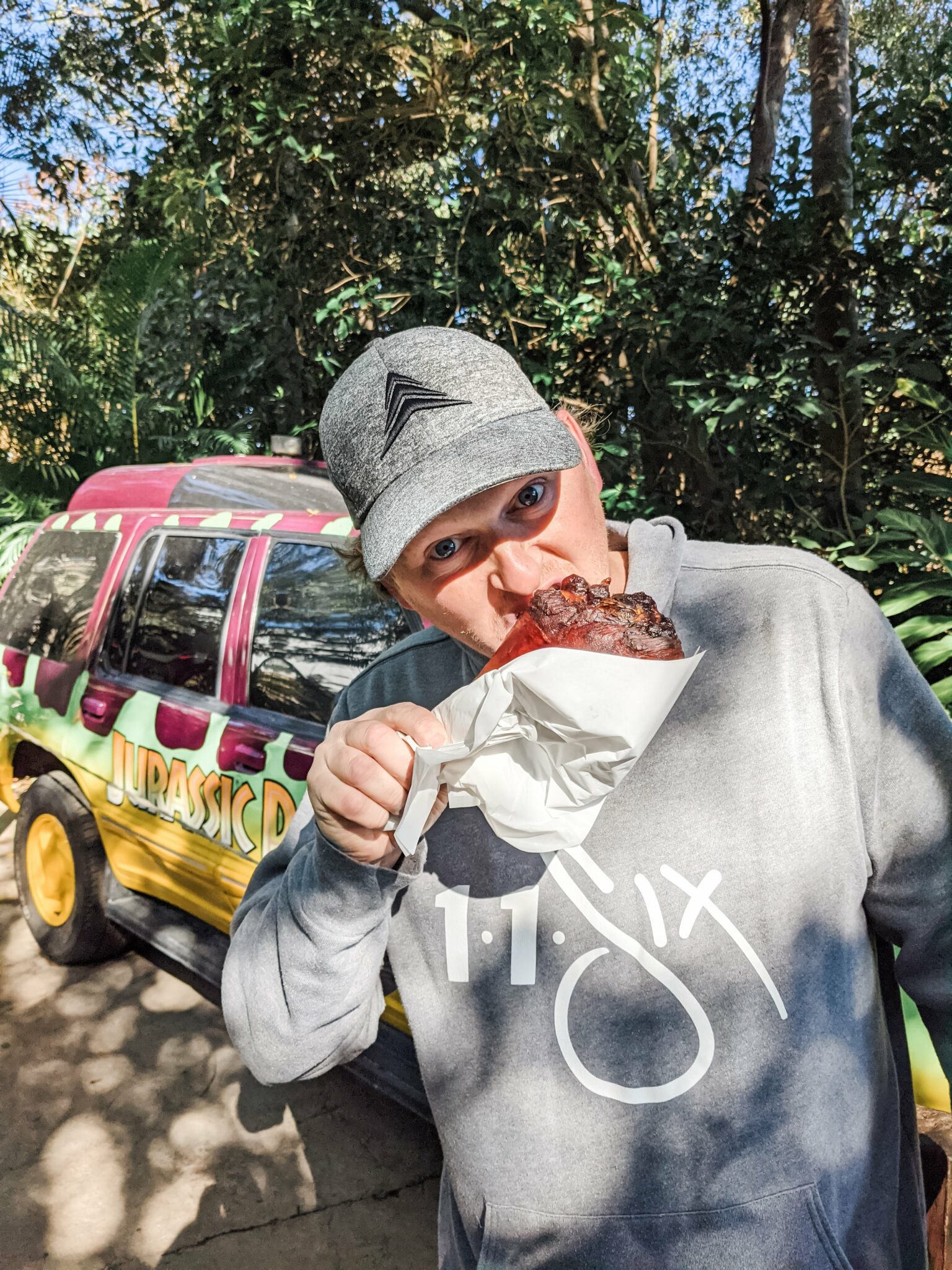 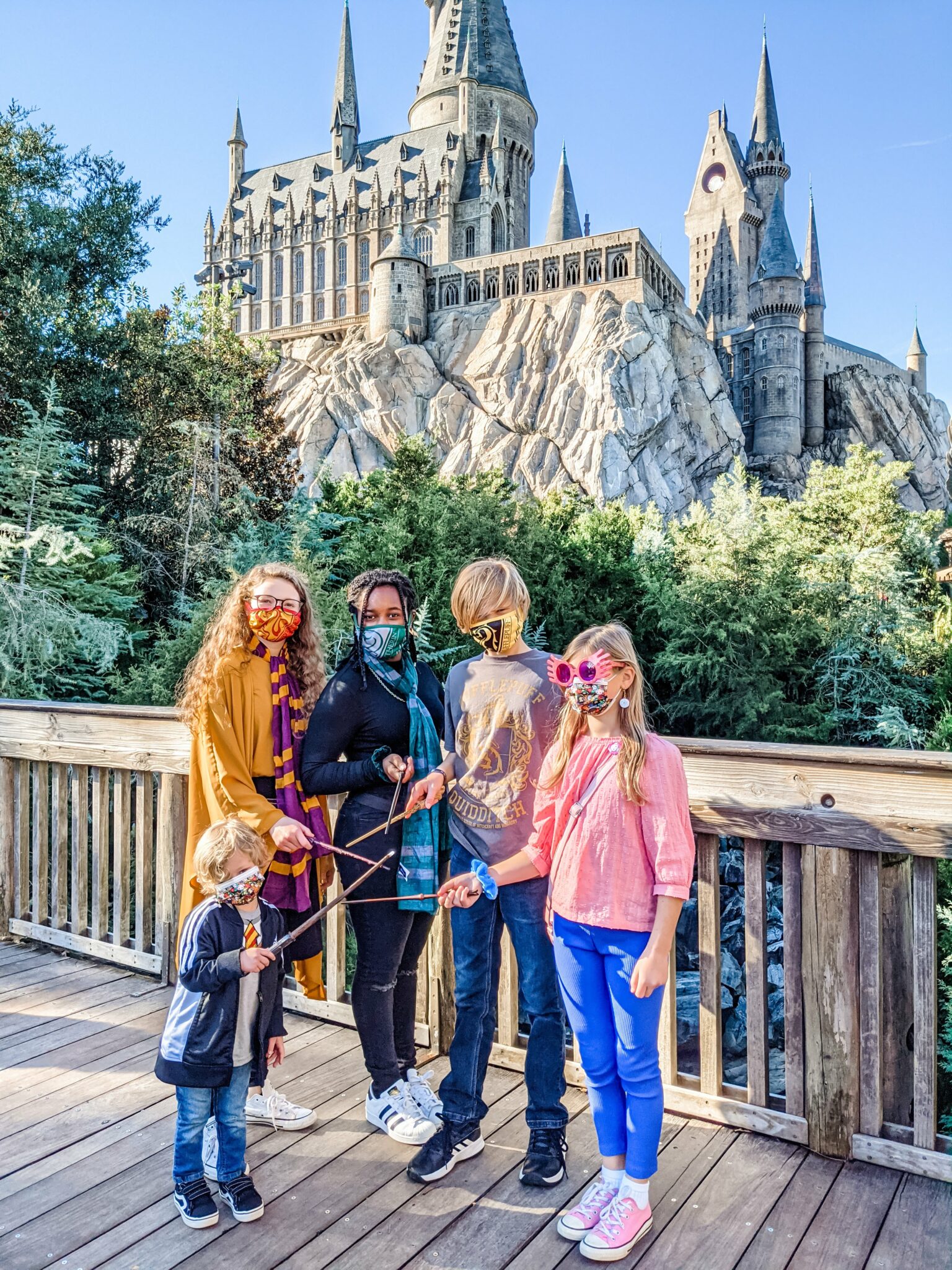 8. On the Bridge in Front of Hogwarts: This photo is a must. Have your wands ready! 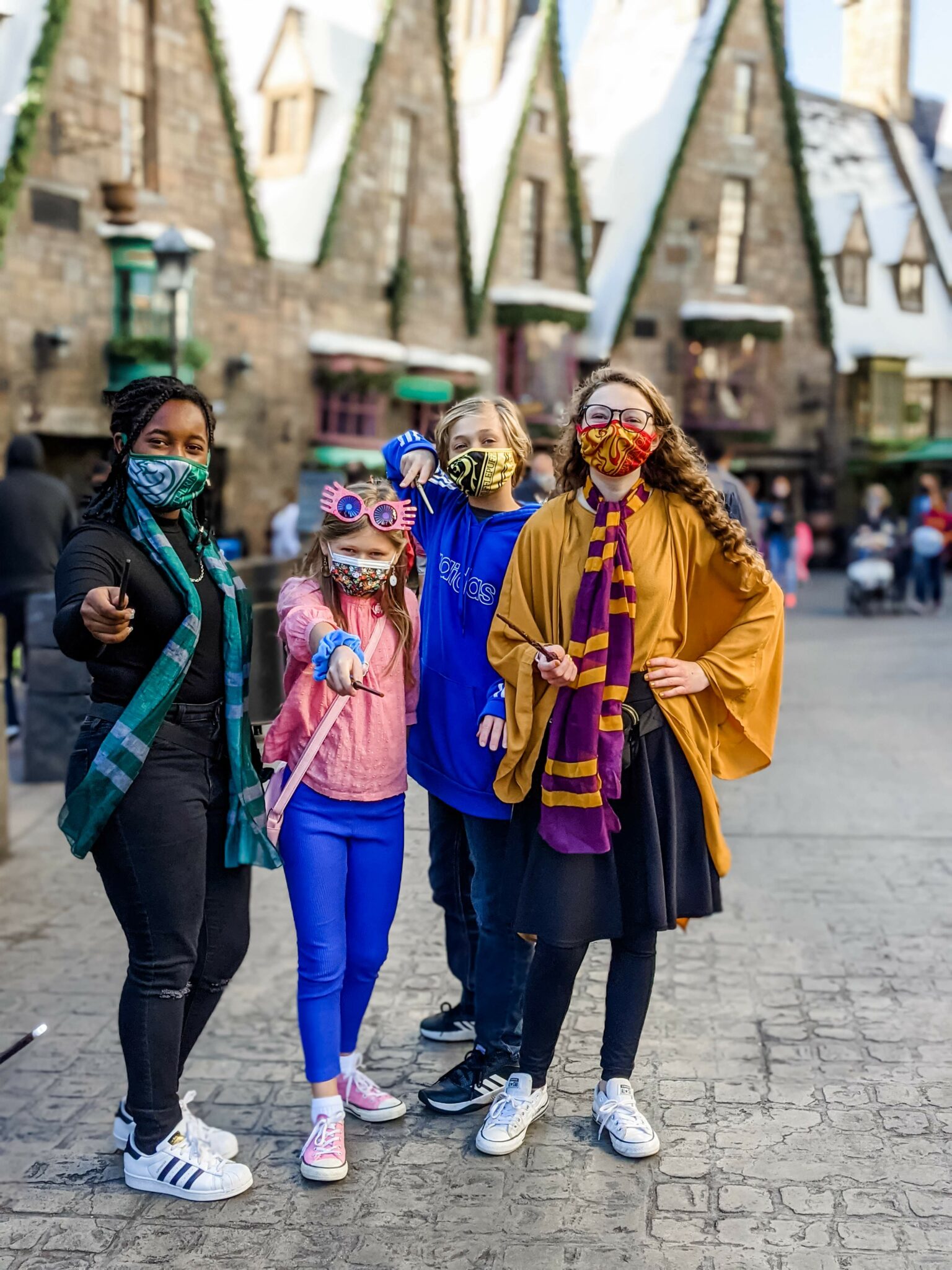 9. Anywhere in Hogsmeade: This entire area is so breathtaking and picturesque. You really can’t pick a bad spot.

Tip: To get a picture in high traffic area like this, go early in the day or on a weekday for less crowds. Be prepared to wait for the crowd to thin out. Put your camera on portrait mode to blur out the background, or get low and shoot up to make people in the background disappear! 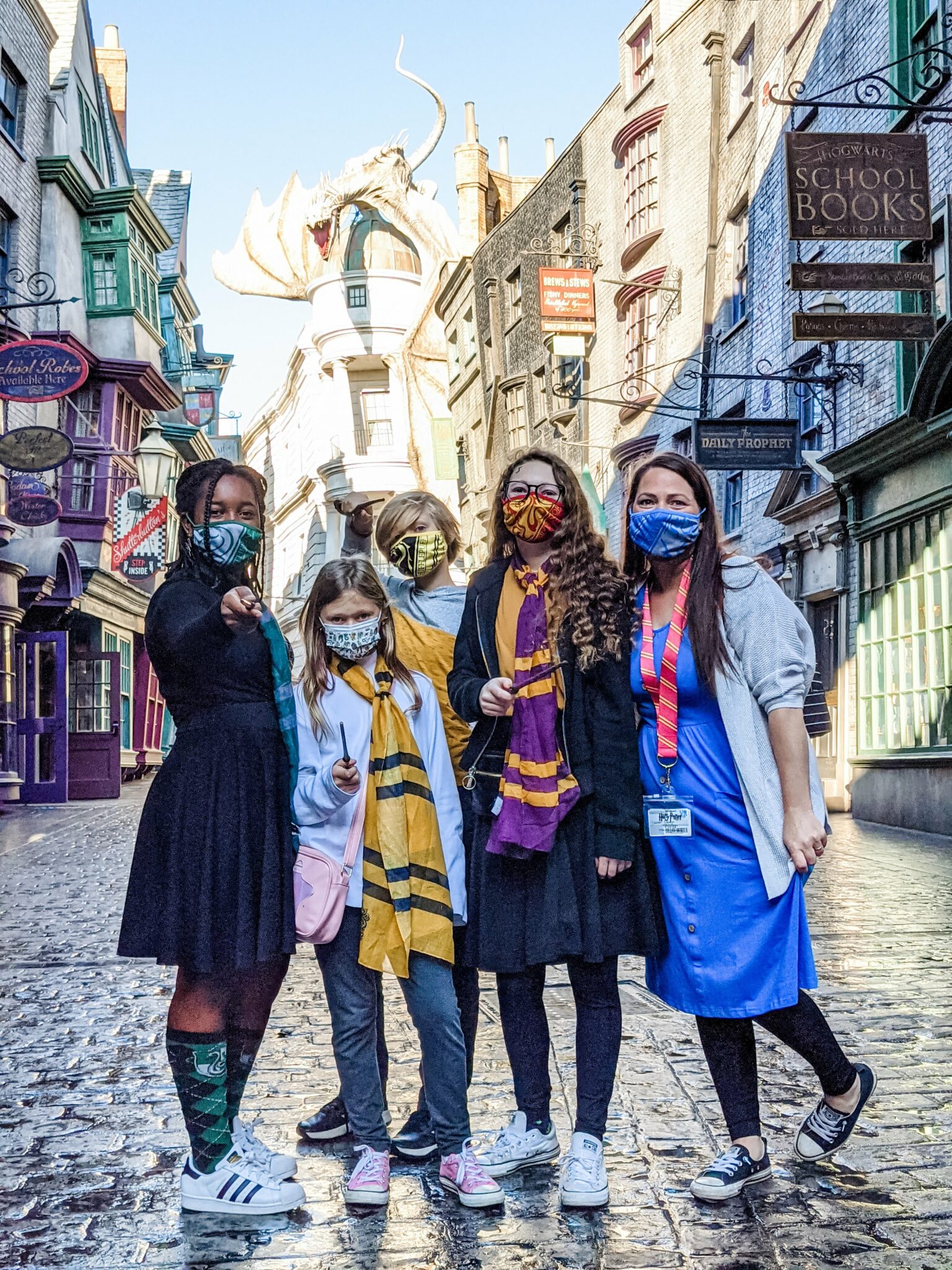 Over on the Universal Studios side, our favorite place to get pictures is in Diagon Alley! You’ll either need an annual pass that gets you in early, or energy to book it back here before the crowds arrive if you want photos without other people in them. This is one of the most crowded areas at the park. We like to go on weekdays during the off season to get the best shots.

Tip: If you stand in the street of Diagon Alley and time it perfectly, you might catch a photo with the fire breathing dragon in the background! Be warned, this might startle young children. The fire is on a timer and goes off every 10 minute if the weather is cooperative. Ask a nearby wizard when it will go next and wait for the low rumble leading up to the blast! 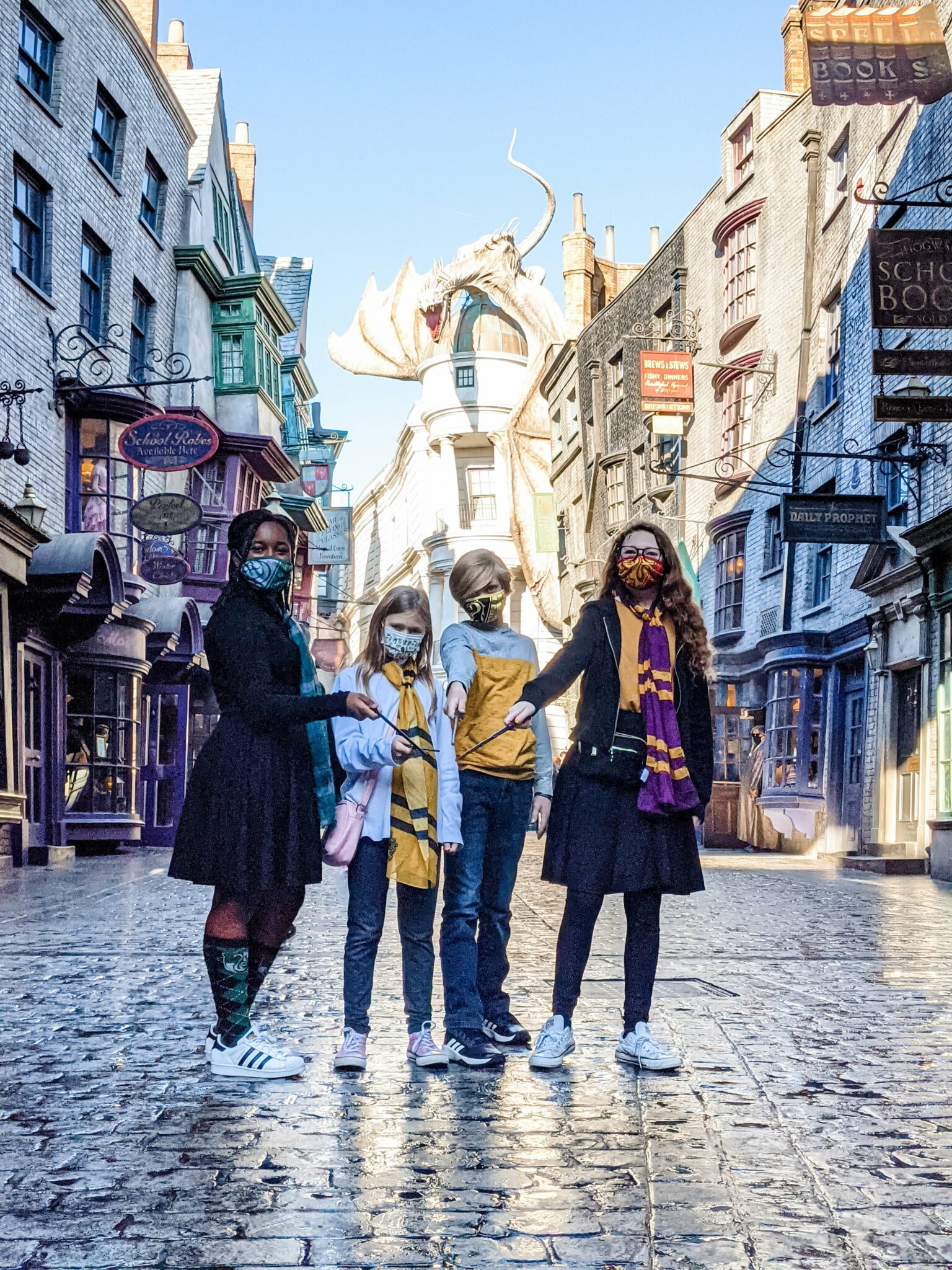 1. Diagon Alley: Our favorite place for pictures! If you missed the tips I shared above, go back to read them. Use the slider below to compare the weekday offseason crowd to a weekend crowd. 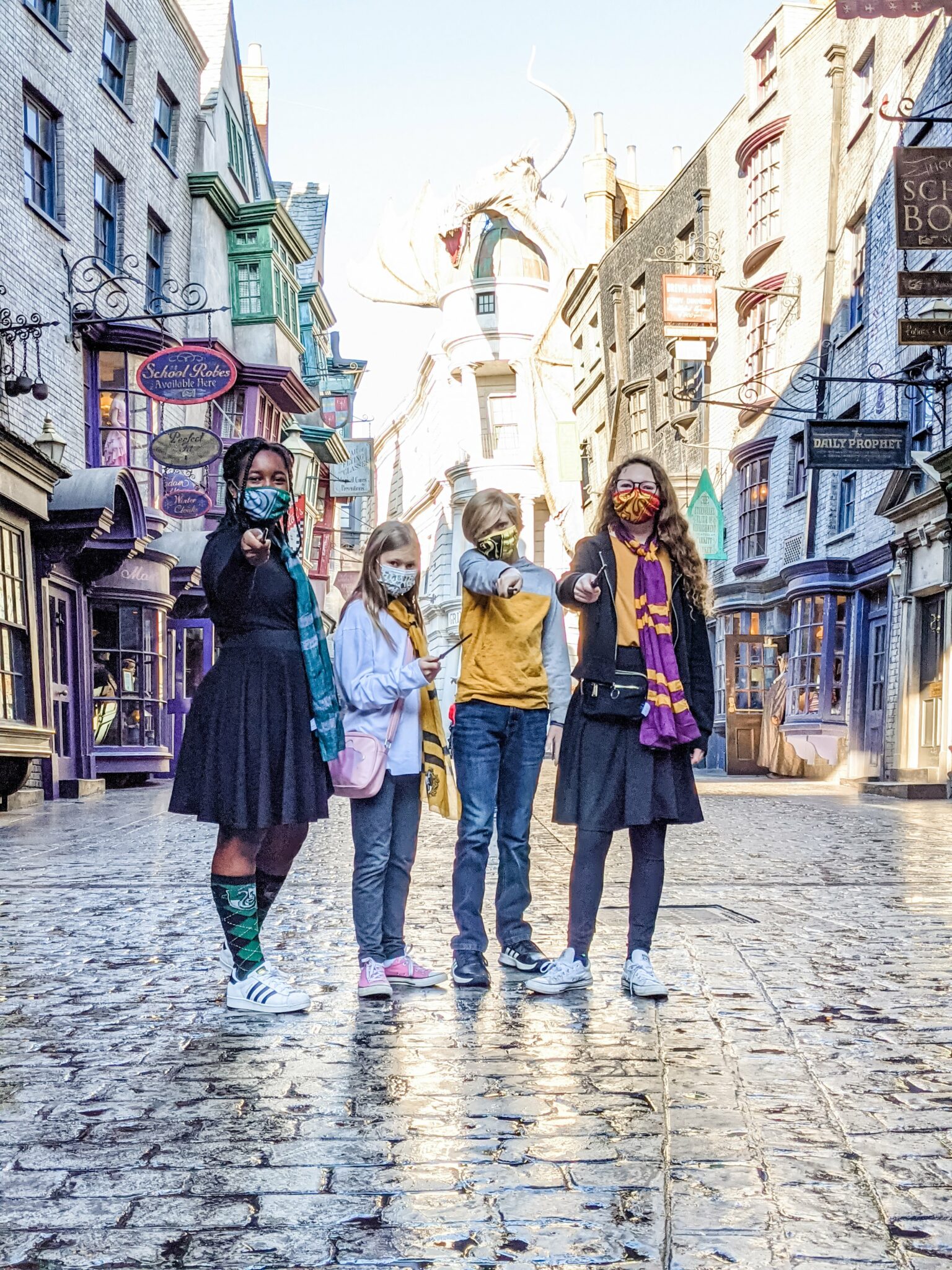 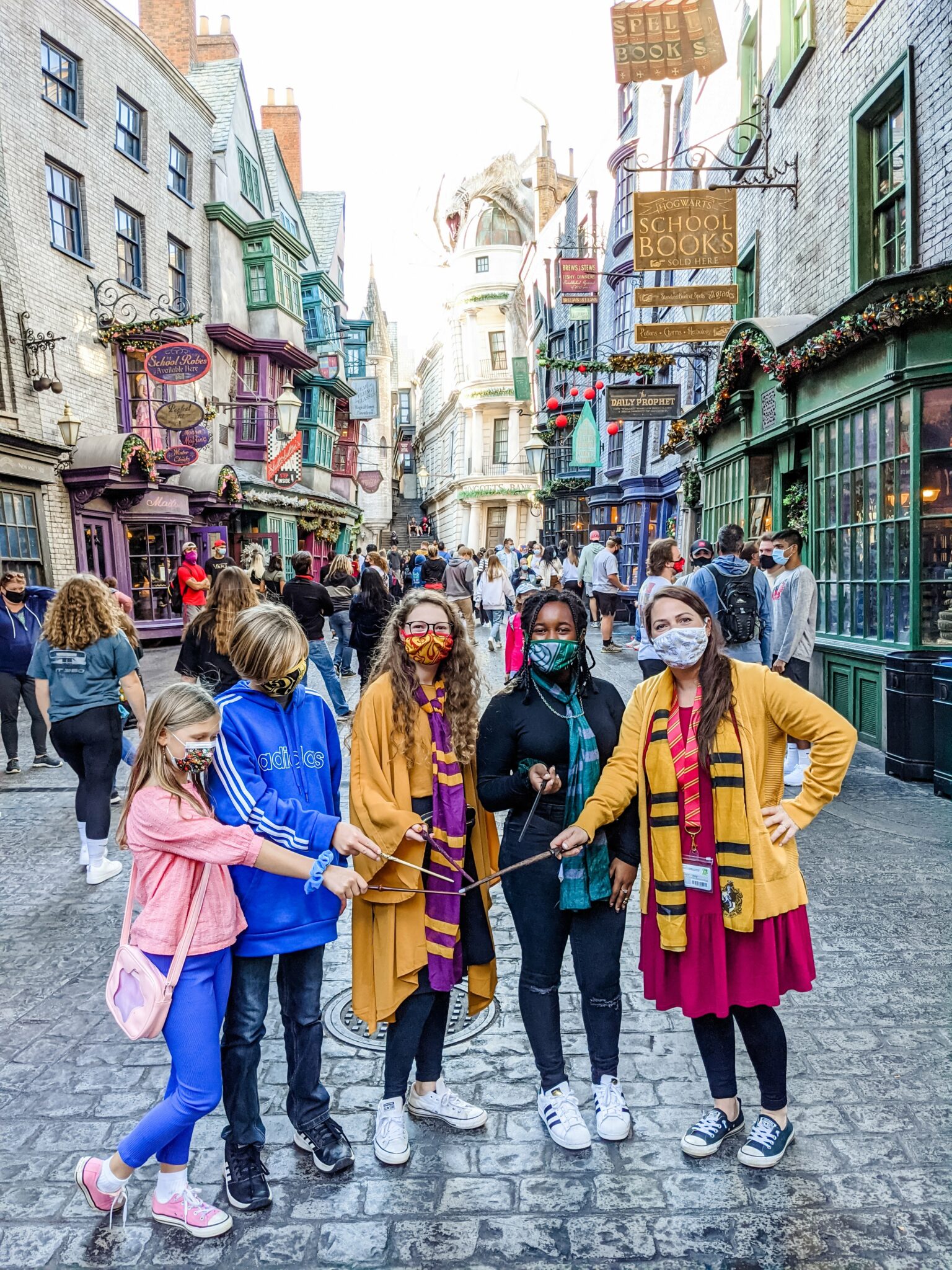 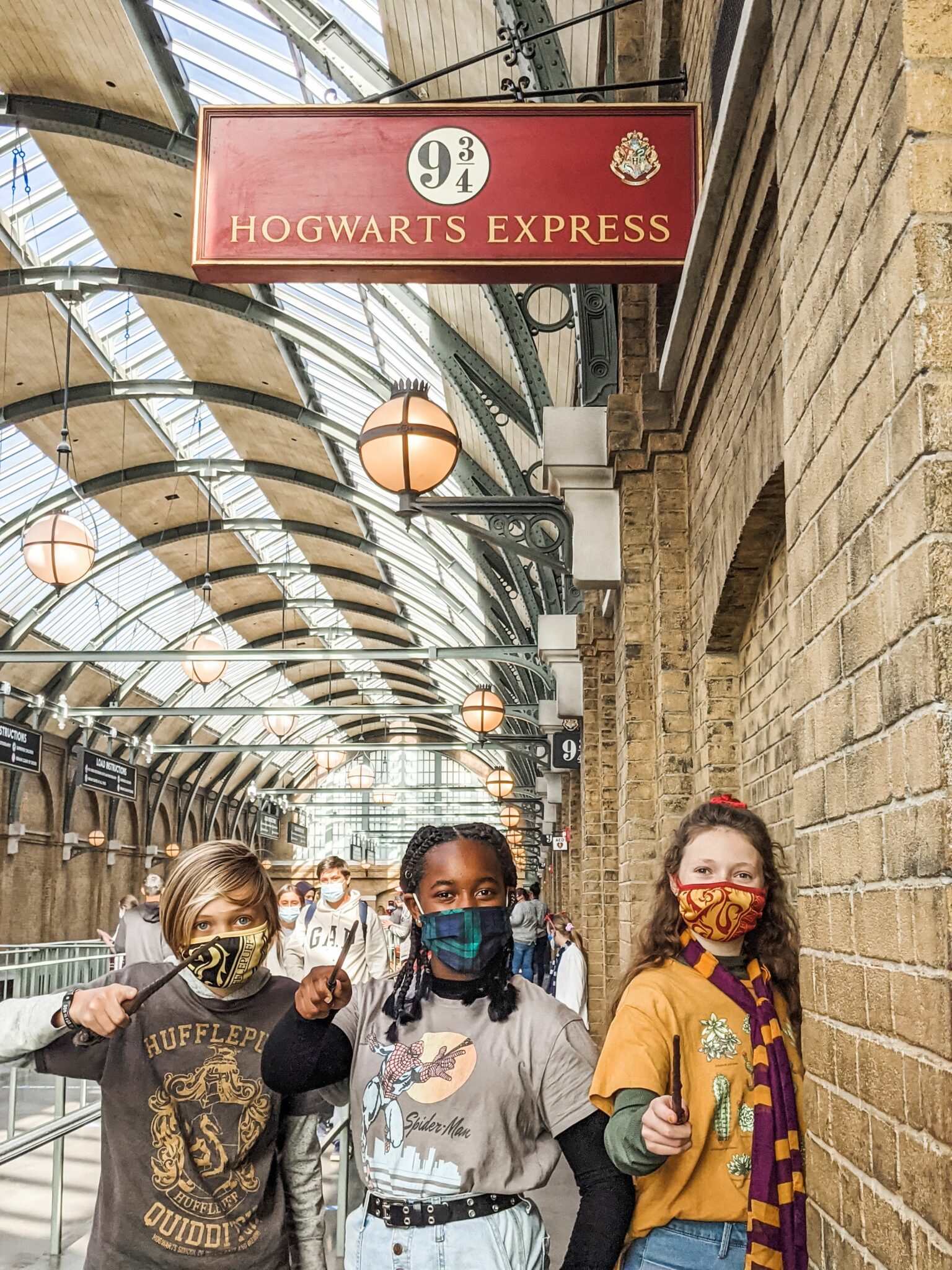 Tip: Not a picture, but you will want to have one member of your group stand back to video everyone else running through the wall at King’s Cross Station! Ask a team member where this is so you will be prepared. 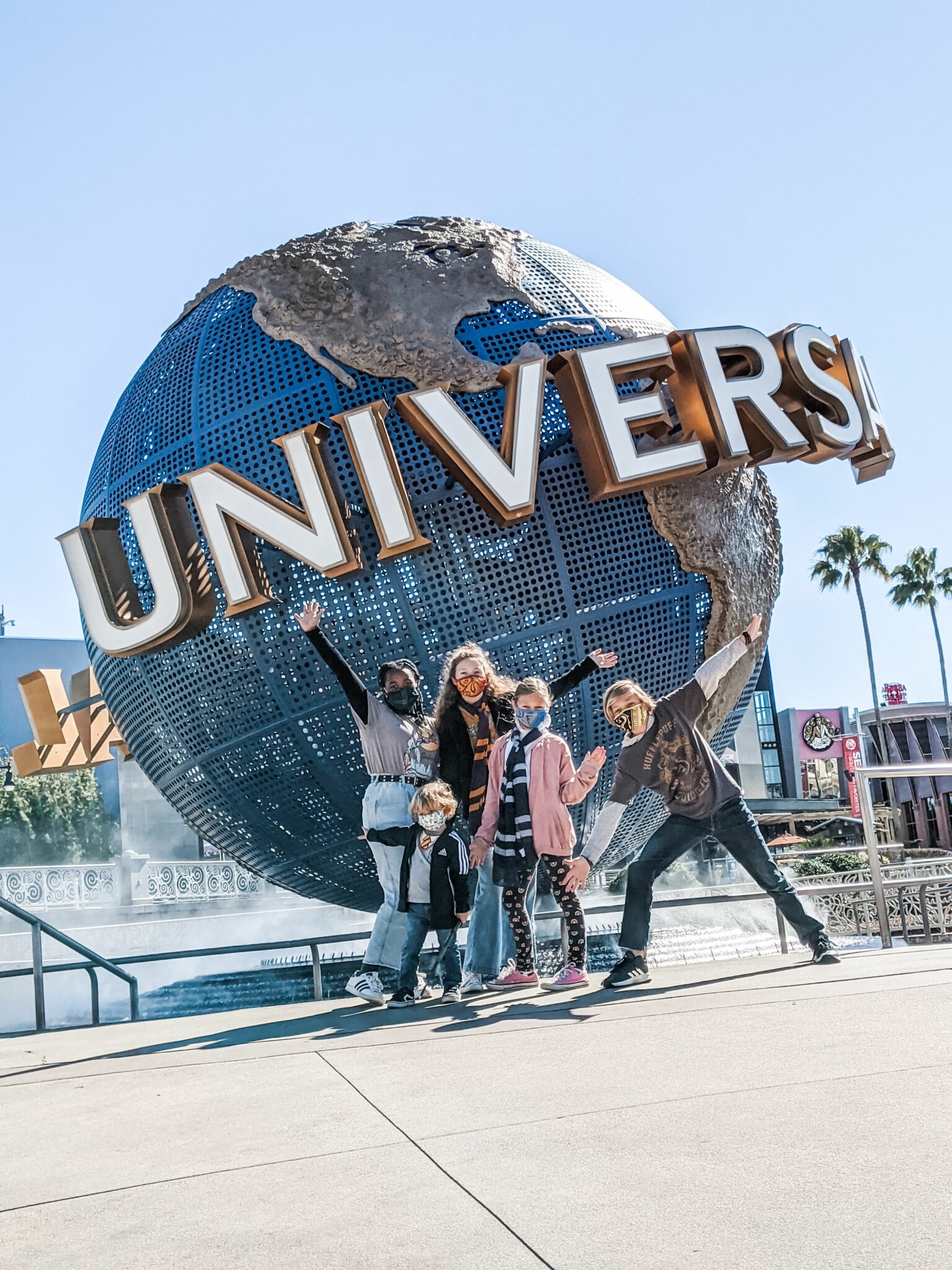 4. In front of the Universal globe: This is probably the most iconic spot to get a picture! We like to wait for the crowd to disperse a little and the “Universal” to show up in front. Get down low for a more epic picture! 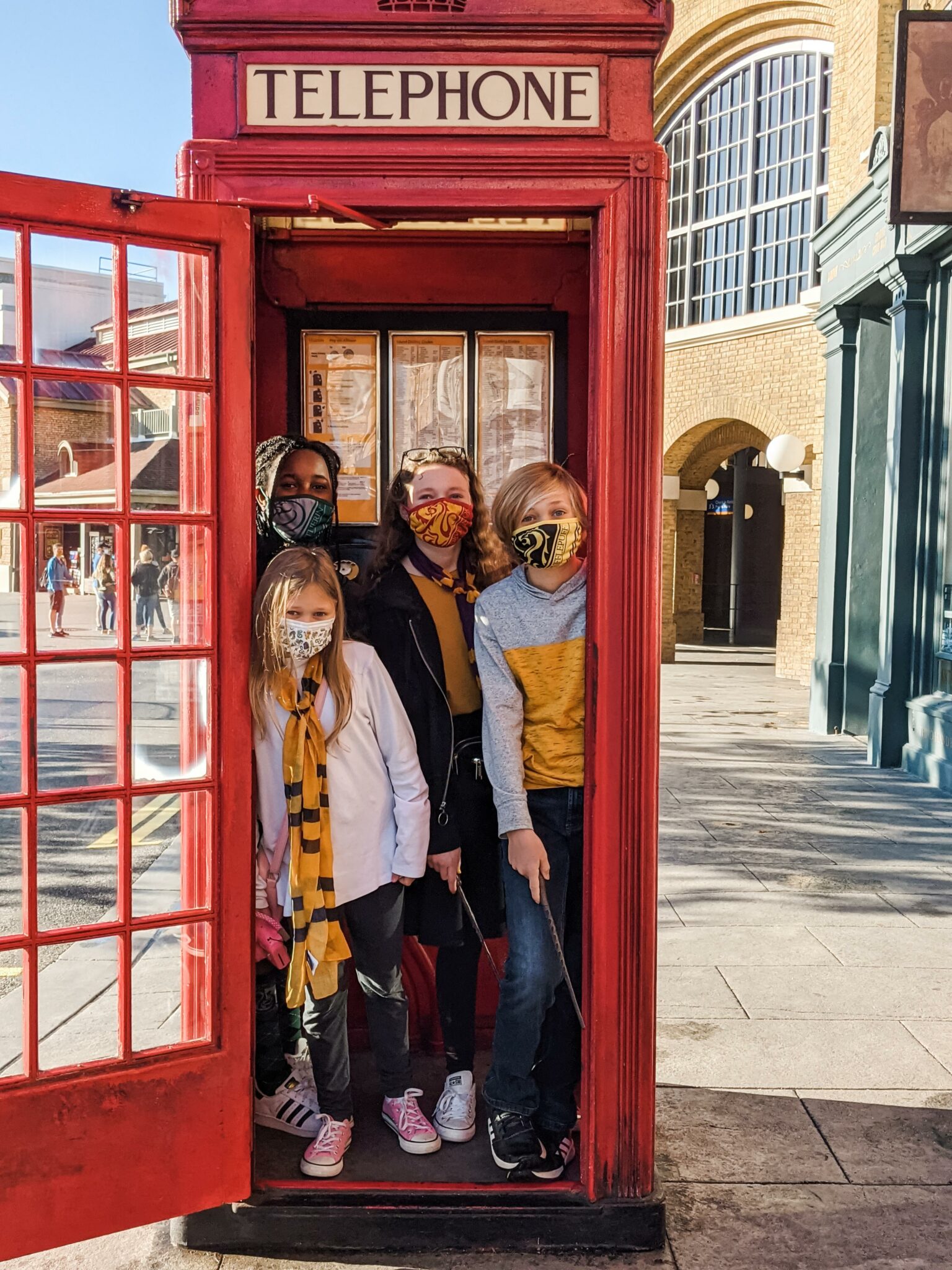 5. The phone booth in London 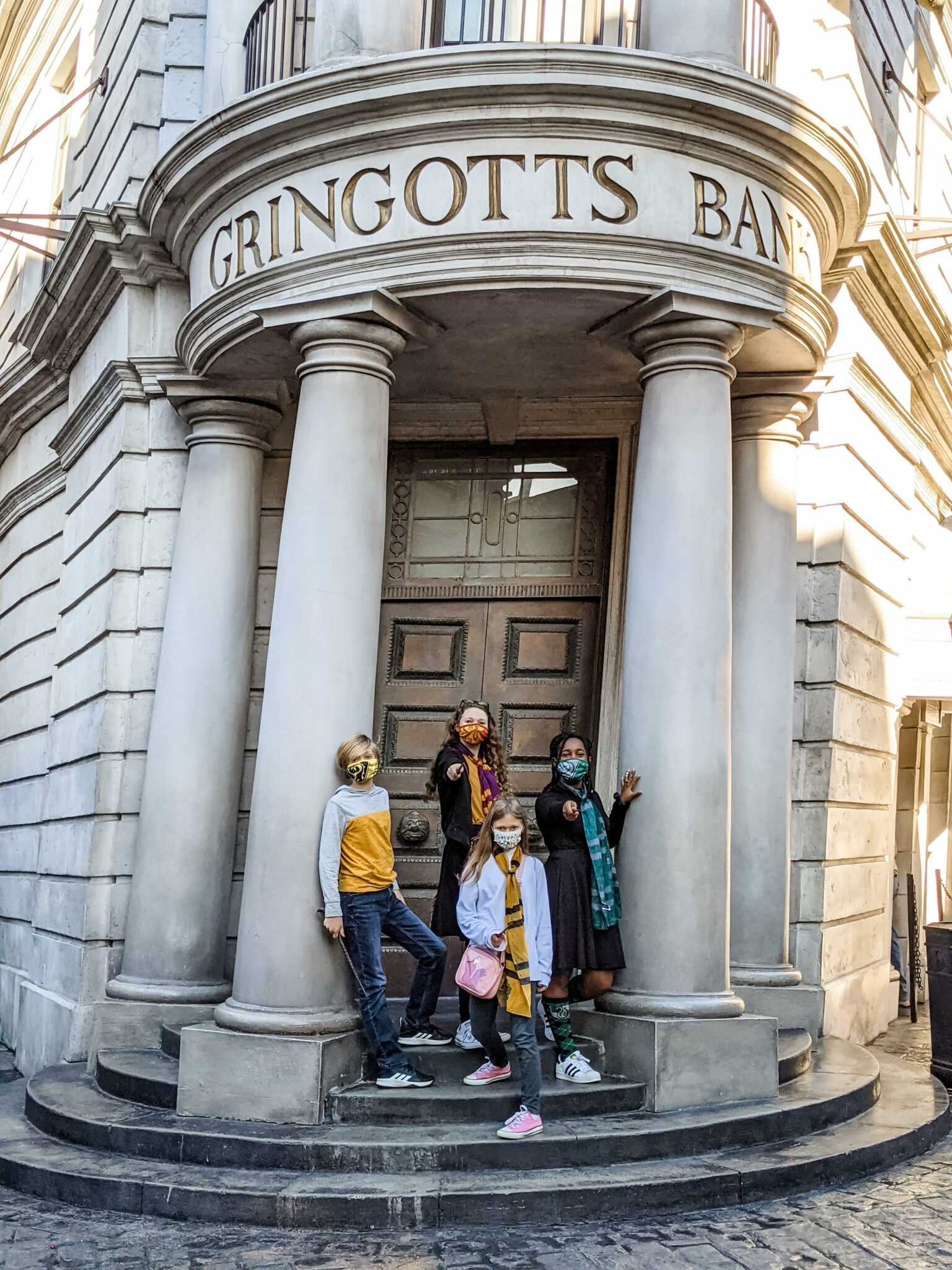 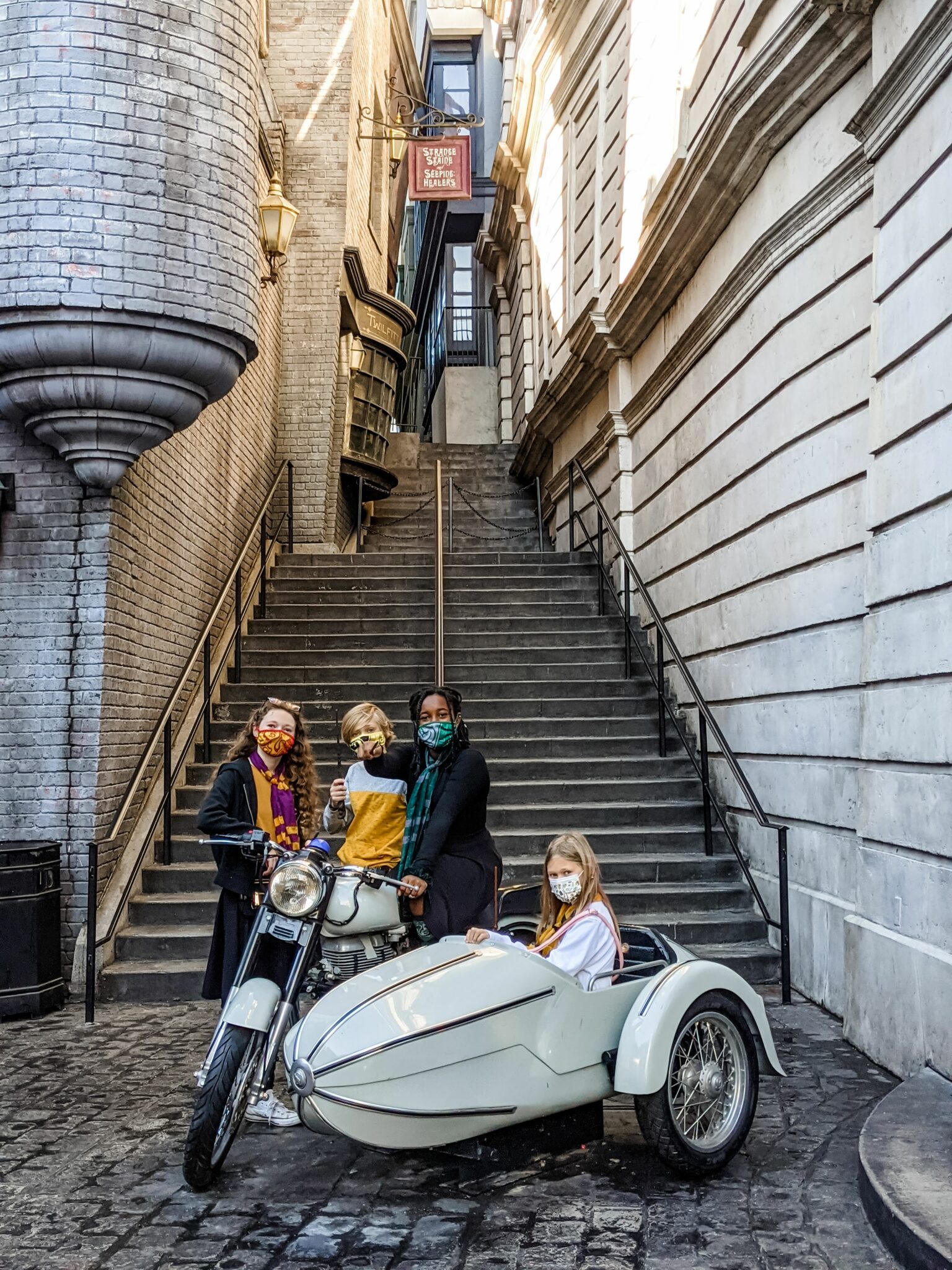 7. Motorbike next to Gringotts Bank 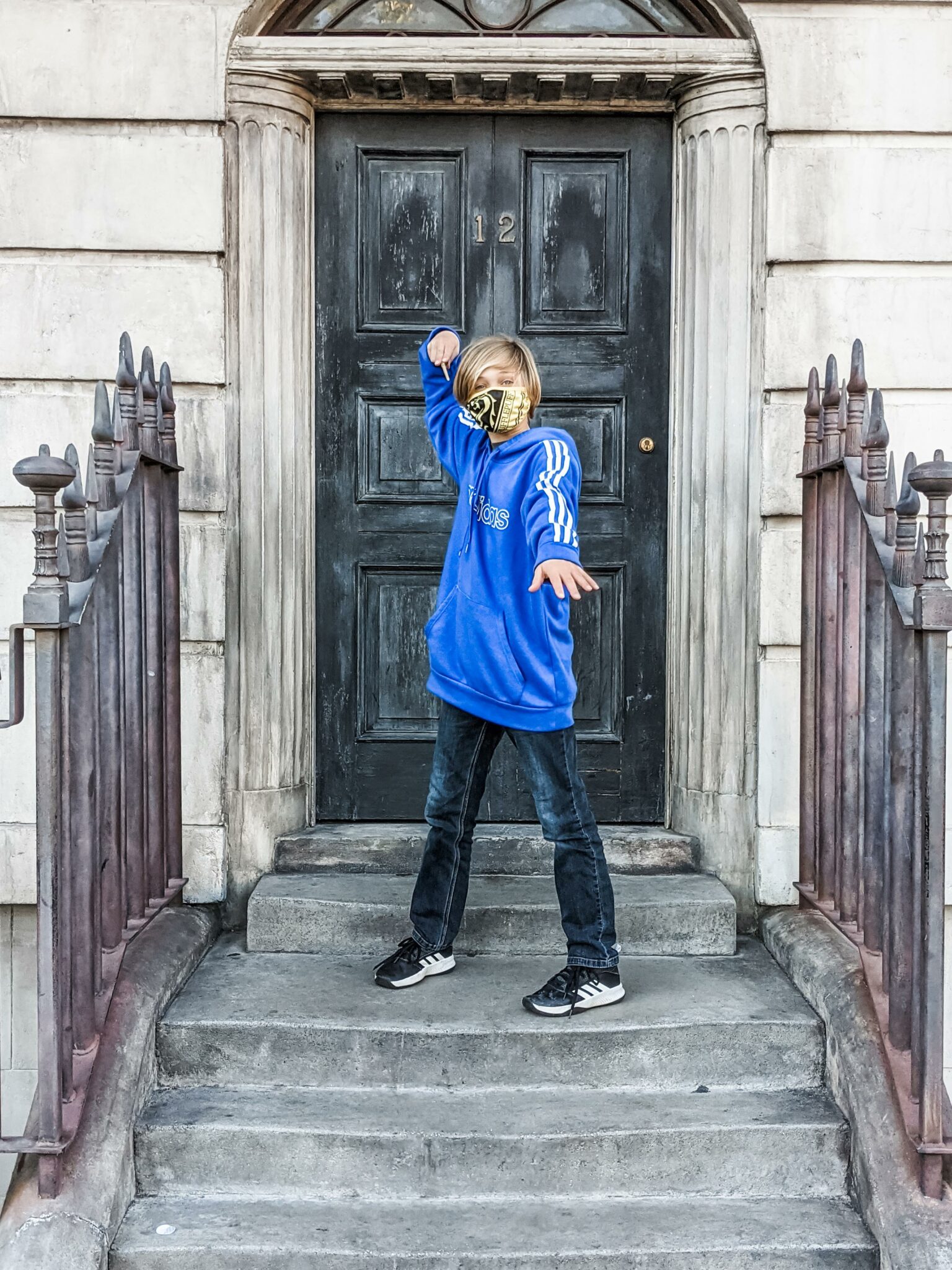 8. Grimmauld Place in London outside Diagon Alley: Watch for Kreature in an upstairs window! 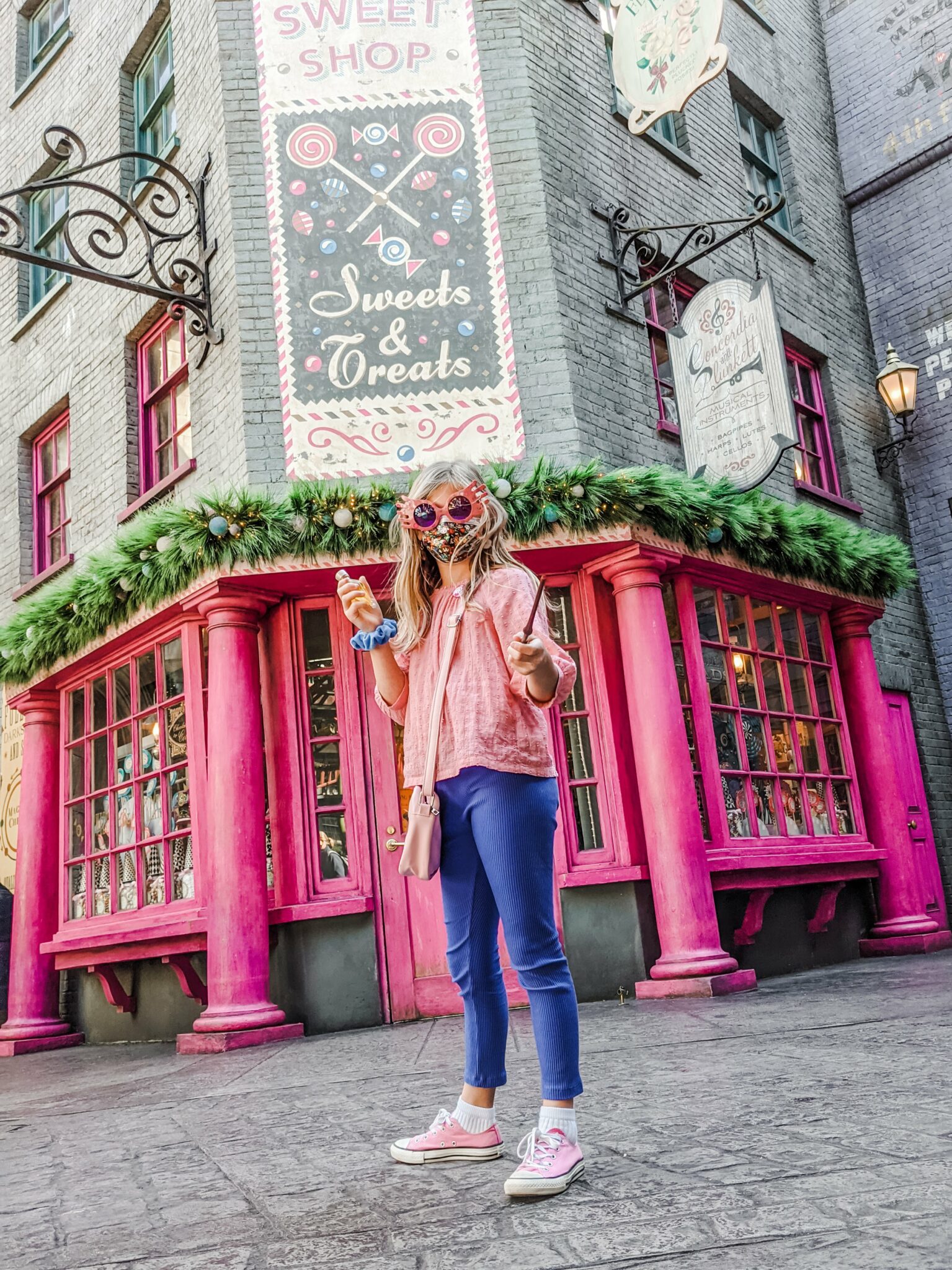 9. In front of Sugarplum’s Sweet Shop 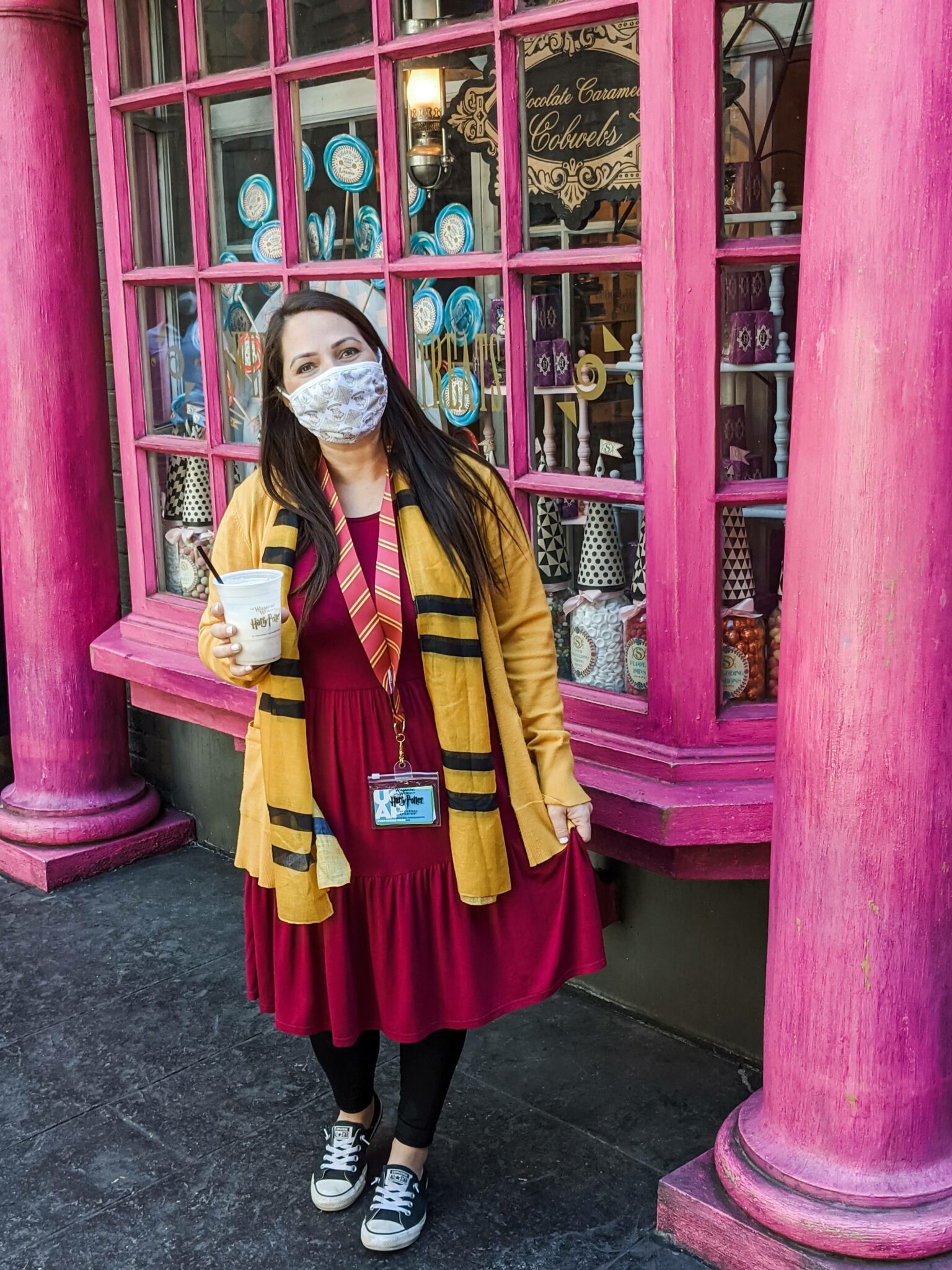 10. next to Sugarplum’s Sweet Shop

11. Holding a Butterbeer: Grab a Butterbeer in either park, but make sure you get a picture of it!

12. Next to the Rip Ride Rockit where it sticks out in front of New York

The City Walk area has a lot of fun photo spots! Be sure to watch for them as you walk around this area outside the parks. 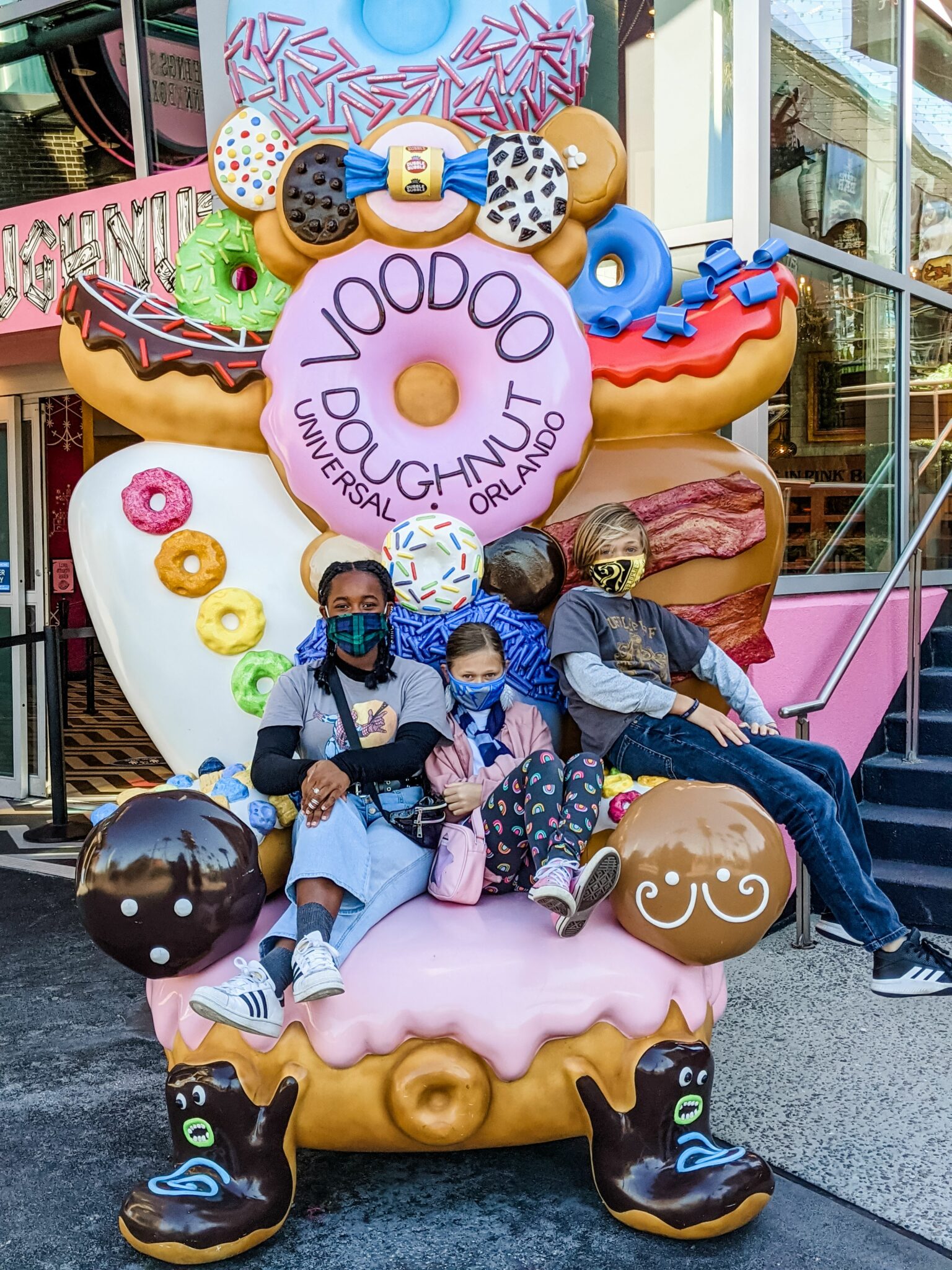 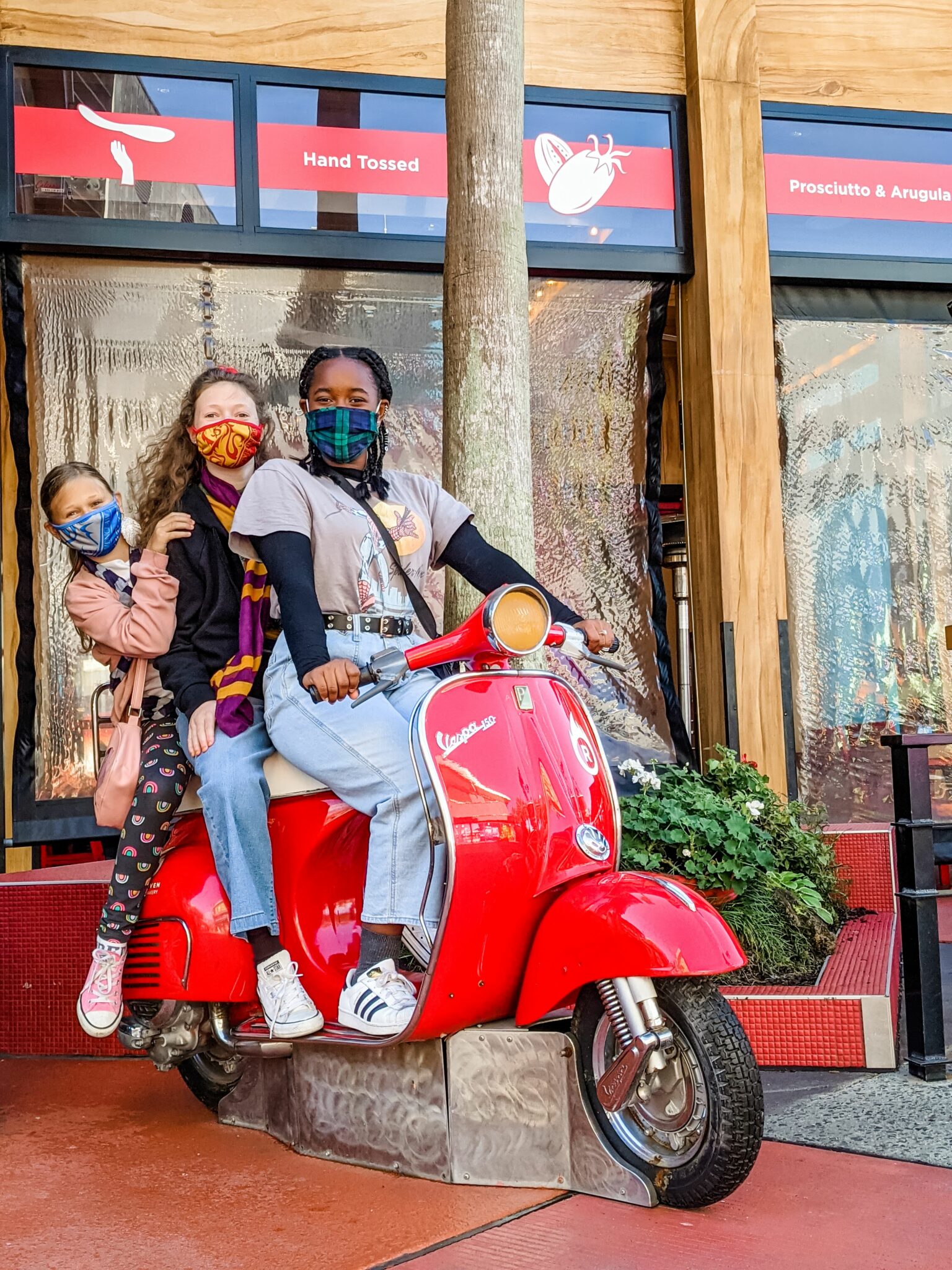 There are a few things I haven’t pictured that are worth noting! Universal Studios does offer a photo package that you can read about here: My Universal Photos

Here are some other great spots that aren’t pictured but deserve an honorable mention: